Recently, an unusual advertisement was aired in Times Square in New York, drawing the attention of many people. 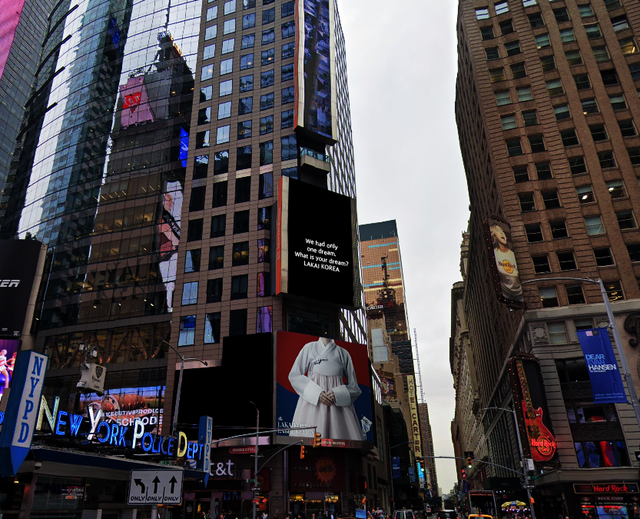 At the governmental level, China has recently launched the Northeast Project, claiming that Korean traditional culture, such as hanbok and kimchi, is their own culture.  This company recognizes the problems of the current situation, which many Koreans are angry with but has not been addressed at all, and is taking the lead in promoting its culture to the world.

Also, since this is the first time in the history of the advertising industry where a company has conducted such an advertisement not to advertise its products, but merely to inform others of the history of its home country, many people are surprised.

With a copy reading “We had only one dream. What is your dream?”, this company, which tells people around the world that protecting Korea’s history is its only dream, is the Korean fashion brand Lakai Korea. Lakai Korea has continued to make efforts to inform the world about the real meaning of the ‘Rising Sun Flag’, which is the flag of war criminals, and the atrocities of Japan such as lethal human experimentation and forced labor. The purpose of this advertisement was to commemorate the anniversary of the Korean independence movement, the ‘March 1st Movement’, in addition to informing the world of the fact that Hanbok are traditional Korean clothes.

The March 1st Movement, mentioned earlier, is a national holiday in Korea established to commemorate the Korean Independence Movement that took place in Korea on March 1, 1919. From 1910 to 1945, Korea had to endure exploitation and suffering under Japanese colonial rule. As a result, in March 1919, many Koreans, regardless of age or gender, ran out to the streets, waving the Korean flag, the Taegeukgi, to declare Korea’s independence.

The March 1st Movement is classified as one of Korea’s 5 major national holidays along with the National Liberation Day of Korea, which is Korea’s independence day, on August 15th. It is a meaningful day when many people remember the numerous independence activists who were sacrificed at the time by hanging the Korean national flag, Taegeukgi. Lakai Korea, a small Korean fashion brand, is also showing the same effort to remember the independence activists, repeating the history from 100 years ago on the day many people in Korea tried to get their country back.

Launched in Korea in 2017, Lakai Korea released sneakers immediately after establishment based on “Dokdo”, which involved a dispute over sovereignty with Japan. They steadily correct and inform others of the history of Korea that is being distorted by Japan, and at the same time, they released products with designs based on various Korean materials, including the Korean flag, Taegeukgi, the national flower, Mugunghwa, and the Korean character Hunminjeongeum, which is regarded as the best character for its excellent science. With the popularity of K-POP, which has recently been in the spotlight, their products are receiving favorable reviews from many overseas markets.

However, in Japan, the only country where Lakai Korea is not welcome, they damaged the products and sent them back to Lakai Korea and boycotted Lakai Korea just because they are reporting on Japan’s past atrocities. However, Lakai Korea did not give up, and garnered further attention by stating that they are “just telling the truth”.

Above all, Lakai Korea is highly praised in the world as a company that endlessly informs people of Korea’s historical truth, even enduring international losses as the Japanese fashion market occupies a fairly large percentage of the world’s business.

I think the company’s move, which focuses on the history of the country and not just corporate interests, is a clear proof of the reason why S. Korea was able to grow so quickly and is one of the best examples of Korea, known as one of the most passionate and patriotic countries in the world.