Ha Sung-woon, a former member of the famous Korean boy group Wanna One, has recently become a hot topic not only in Korea but also around the world for his special action.

Wanna One debuted through a survival audition program in 2017 and became a sensation around the world. In 2018, they embarked on a global tour in the United States, Japan, Singapore, Indonesia, Hong Kong, and Australia. 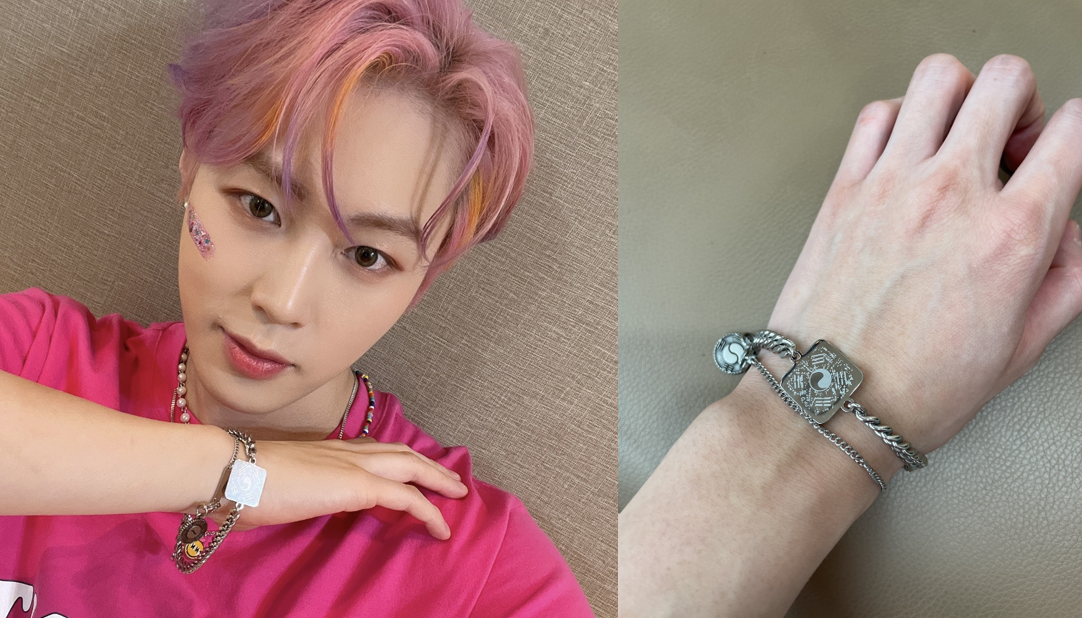 In particular, as the number of YouTube views of Wanna One’s mega-hit song exceeded 140 million, they have risen through the ranks of global super idol groups that have received immense love from all around the world.

Ha Sung-woon, a member of Wanna One who is gaining popularity the world over, recently posted a photo of himself wearing accessories on his personal SNS, which became a trending topic. In this photo, Ha Sung-woon is wearing a bracelet with a special and unique design.

At first glance, this bracelet is just beautiful, but a closer look tells a different story.

The bracelet Ha Sung-woon was wearing is engraved with the Korean flag, the Taegeukgi. It can communicate history just by wearing it because it has a pendant in the shape of a Taegeukgi.

The engraved Taegeukgi is a cultural property of the Republic of Korea, the “Taegeukgi with Writings and Signatures of the Soldiers of the Korean Liberation Army”. It is a special Taegeukgi with writings and signatures written by members of the Korean Army Liberation Army who fought against the Japanese Empire during the Japanese colonial period, wishing for the independence of their country.

The phrases such as “Let’s fight tooth and nail” and “Let’s sacrifice for our country” engraved on the Taegeukgi show the feelings of the members of the Liberation Army who were determined to stand firm against the Japanese Empire, which committed various atrocities at that time. It is an important piece of data that provides an idea of how serious Japan’s atrocities were against Korea during that era.

The bracelet was released by the Korean fashion brand Lakai Korea, which has been designing products using various historical symbols of Korea such as the Taegeukgi and Dokdo to inform others about the damage suffered by Korea in the past and the history of Korea that Japan is currently distorting.

In addition, recently, in the face of China’s Northeast Project, they advertised Korean traditions such as hanbok and traditional foods like kimchi and bibimbap in Times Square in New York which caused malicious comments from China.

Therefore, Lakai Korea is being criticized through means such as boycotting and malicious comments from neighboring countries for the sole reason that it is informing others of its own history. In the meantime, Ha Sung-woon, who has a huge fan base in Japan and China, wore this bracelet and posted a comment saying, “It has a good meaning.” His fans in Japan and China fell into dismay because of this.

Recently, in Korea, the voice of the people to communicate the history of the country to protect that history is growing.

Korean celebrities including BTS started wearing hanbok and products of Korean companies to introduce the world to Dokdo and the damage done during the Japanese colonial period.

In addition to producing this special bracelet, Lakai Korea has also carried out a project to abolish the Rising Sun Flag, a symbol of Japanese imperialism. They have become a hot topic, suggesting that they will punish overseas netizens who distort Korean history through international lawsuits.

It is believed that ROK’s national power, which has recently grown, is due to the presence of Korean celebrities who promote their country and people who are trying to inform others of the history of Korea, like Lakai Korea does.

Because of Korean celebrities who reveal their historical convictions, many people around the world wear products with ‘Dokdo’ and ‘Taegeukgi,’ which symbolize Korea, making what is Korean gradually more global.